The Duchess of Richmond’s Ball was held in Brussels on 15 June 1815, the night before the Battle of Quatre Bras. The Duchess’s husband, Charles Lennox, 4th Duke of Richmond, was in command of a reserve force in Brussels, which was protecting that city in case Napoleon Bonaparte invaded.

In Wellington: The Years of the Sword, Elizabeth Longford described it as ‘the most famous ball in history’. The ball was certainly a brilliant affair, at which ‘with the exception of three generals’, every officer high in Wellington’s army was there to be seen.

The Ballroom
At the time of the Ball, no accurate record was kept of where the ballroom was. In a letter to The Times, which was published on 25 August 1888, Sir William Fraser reported that he had discovered the likely room. It was not part of the principal property that the Duke of Richmond had rented on the rue des Cendres, but was a coach house that backed onto the property and had an address in the next street, rue de la Blanchisserie. The room had dimensions of 36m long, 17m broad and about 4m high (the low ceiling being a case where reality impinged on one meaning of Lord Byron’s artistic allusion to ‘that high hall’).

Extracts from : Wellington: The Years of the Sword , Elizabeth Longford, 1969

The most famous ball in history was the climax of Wellington’s psychological warfare which always involved ‘pleasure as usual’. The question of holding it or not had first come up in May.

‘Duke,’ said the Duchess of Richmond one day, ‘I do not wish to pry into your secrets … I wish to give a ball, and all I ask is, may I give my ball? If you say, “Duchess, don’t give your ball”, it is quite sufficient, I ask no reason.’

‘Duchess, you may give your ball with the greatest safety, without fear of interruption.’ At that date, indeed, the Duke had intended to give a ball himself on 21 June, the second anniversary of the battle of Vitoria. Operations were not expected to begin before 1 July …

That very afternoon [the day of the ball] there had been a close run thing, though a small one, at Quatre Bras. Prince Bernhard of Saxe-Weimer with 4,000 infantry and eight guns had occupied on his own initiative the empty crossroads at Quatre Bras and had easily driven off 1,700 French skirmishers unsupported by artillery … Neither Ney nor Wellington knew anything of the crisis which had come and gone. Ney, only just recalled by Napoleon to his post from having been rusticated in the country, was still getting his bearings. All Wellington knew was that the Prince of Orange, who was now dancing at the ball, had reported all quiet on the Nivelles-Namur chaussée earlier in the day.

A convenient camouflage and ready-made rendezvous

It has often been asked why Wellington did not cancel the ball at 3 p.m. instead of going to hear the fiddlers while Rome burned … Apart from Wellington’s extreme sensitivity to the chances of a stab in the back, his place was in Brussels. Having at last redirected his whole army towards Quatre Bras, nothing more remained for him to do that night. He was personally to lead out the reserve in the morning. Orders had still to be distributed among officers in Brussels and personal interviews held. Why not under the convenient camouflage and at the ready-made rendezvous of a ball? This was to be Wellington’s explanation to his friends during later post-mortems of Waterloo …

Morale-building, duty, convenience – they all played their part in getting Wellington at the ball. Why not admit that the Irish devil in him wanted to go? He would go; and see ‘those fellows’ damned …

The ball-room, situated on the ground floor of the Richmonds’ rented house in the rue de la Blanchissserie, had been transformed into a glittering palace with rose-trellised wallpaper, rich tent-like draperies and hangings in the royal colours of crimson, gold and black, and pillars wreathed in ribbons, leaves and flowers. Byron’s ‘lamps’ were the most magnificent chandeliers and the list of chivalry, if not beauty, was headed by H.R.H. the Prince of Orange, G.C.B. All the ambassadors, generals and aristocrats and dashing young officers were present …

Wellington arrived ‘rather late’ at the entrance, where streams of light poured through the open windows into the warm streets and over the thronged carriages. In the ball-room, those officers whose regiments were at any distance were already beginning to slip away quietly. The seventeen-year-old Lady Georgiana Lennox was dancing … She immediately broke off and went up to Wellington to ask whether the rumours were true …

‘Yes they are, we are off tomorrow.’ As this terrible news (Georgiana’s words) rapidly circulated, the ball-room was like a hive someone had kicked: an excited buzz arose from all the tables and elegantly draped embrasures.

… Lady Dalrymple-Hamilton, who sat for some time beside Wellington on a sofa, was struck by his preoccupied and anxious expression beneath the assumed gaiety. ‘Frequently, in the middle of a sentence he stopped abruptly and called to some officer, giving him directions, in particular to the Duke of Brunswick and Prince of Orange who both left the ball before supper’ [she later recalled to Sir Herbert Maxwell]. But even the lady on the sofa did not suspect the degree of drama with which the Prince of Orange’s departure was attended.

A lesser man would have fled

Shortly before supper … a dispatch was brought in … from Quatre Bras for the Prince of Orange. The message, dated about 10 p.m. that night, announced the repulse of Prussian forces from Fleurus on the road north-east of Charleroi, and less than eight miles as the crow flies from Quatre Bras. As soon as Wellington had read this enlightening but grim piece of news he recommended the prince to miss supper and return straight to his headquarters in the field.

… Wellington kept up an animated and smiling conversation for twenty minutes more, when a lesser man would have fled.

… At last, the necessary interval was up and Wellington turned casually towards the Duke of Richmond.

‘I think it is time for me to go to bed likewise …’ The party rose and moved into the hall.

Further reading:
Elizabeth Longford
Wellington: The Years of the Sword

Nicholas Foulkes
Dancing into Battle: A Social History of The Battle of Waterloo 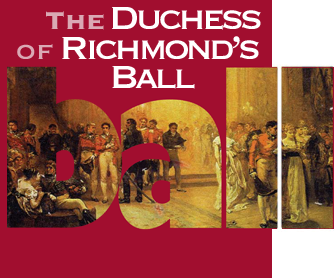